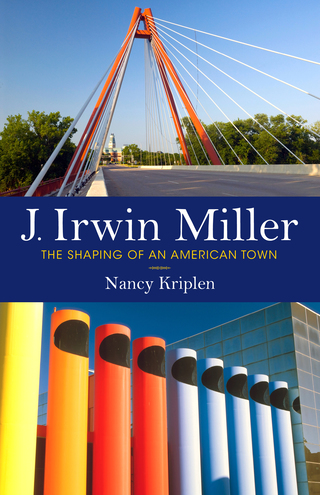 Buy at Amazon , Barnes & Noble, or your favorite local bookseller, such as Viewpoint Books in Columbus, IN.

This book was recently used as a source for Aaron Renn's article in The Atlantic, Dec. 20, 2019, "The Rust Belt Didn't Have To Happen".

The Shaping of An American Town

is Nancy Kriplen's most recent biography, published in October 2019 by Indiana University Press.

J. Irwin Miller, subject of author Nancy Kriplen's new biography, was a remarkable man. Not only was he an industrialist (he headed Cummins Engine Co. for 30 years) but a patron of the arts, a civil rights activist, first layman to head the National Council of Churches, and a near-professional violinist. The book's subtitle, The Shaping of An American Town, refers to Miller's leadership in turning his small, midwestern hometown of Columbus, Indiana, into a gem of midcentury modern architecture. The spectacular schools, churches, libraries, fire stations and homes designed by luminaries such as I.M. Pei, Kevin Roche, Eliel and Eero Saarinen, are not only used by the town's residents today but visited by thousands of visitors each year.

Nancy Kriplen's previous biography was The Eccentric Billionaire: John D. MacArthur -- Empire Builder, Reluctant Philanthropist, Relentless Adversary (New York: Amacom Books, 2008). It is the biography of the colorful, controversial insurance and real estate tycoon whose money funds the John D. and Catherine T. MacArthur Foundation. At the time of his death in 1978, MacArthur was the second richest man in the US (after the reclusive shipping magnate Daniel K. Ludwig).

After making the first part of his fortune in Chicago with Bankers Life & Casualty Co., MacArthur moved his operations to Florida where he ran his empire from a table in the coffee shop of a modest beach-front hotel on Singer Island, north of Palm Beach. It was his hotel, of course. At the time of his death in 1978 MacArthur probably owned more land in Florida than any other single individual.

Nancy Kriplen's earlier biography was Dwight Davis: The Man and The Cup (London: (Ebury Press/Random House U.K., 1999), the life story of the man who donated one of the sporting world's most famous trophies, tennis's Davis Cup, in 1900 while still a student at Harvard. He later served as Secretary of War and Governor General of the Philippines.

Researching the lives of such different men was fascinating, says Kriplen. Though all three men were extremely wealthy, the similarity ended there. "Everyone wanted to talk to me about Miller and Davis. Many sources were reluctant to be interviewed about John MacArthur. Davis was polished, urbane, had a law degree, inherited his money and had a sense of noblesse oblige. Miller had degrees from Yale and Oxford and also inherited his money. MacArthur was a scrappy, risk taker, who worked his way up from genteel poverty and whiose education stopped in the eighth grade.

Nancy Kriplen was formerly on the staffs of Time Magazine and Scripps Howard's Indianapolis Times. She has also written for the New York Times, Smithsonian, Opera News, American History Illustrated, Saveur and other publications.

Kriplen is a graduate of Purdue University, where she was editor-in-chief of the campus daily newspaper. She received a 2009-2010 Lilly Endowment Creative Renewal fellowship, administered by the Arts Council of Indianapolis, and Indiana Arts Commission Individual Artist grants for 2011-2012 and 2015-2016. She was also named a Strnad Fellow by the Ragdale Foundation, an interdisciplinary artist community near Chicago. She and her husband are the parents of three adult children.

"Alternately inspiring and elegiac, Nancy Kriplen's engaging biography of J. Irwin Miller captures his remarkable life and legacy as an industrialist, philanthropist, patron of the arts, university trustee, faith leader, and master builder.  The engineering and manufacturing company he ran and the town he shaped...represent only a fraction of his contribution to 20th century America.

-- Deborah Berke, Dean of the Yale School of Architecture

"What really made J. Irwin Miller one of the noblest Americans of our age was that he accomplished all that he did with consistent modest, decency, fairness and respect, qualities that are in short supply in public life today....This book not only led me to admire Miller all the more, but also to hope that reading about his life might help us to restore the tolerance and reason that he believed were vital to civilized community."

"Kriplen delivers a braiding of family closeness, civic caring, and integrative entrepreneurship to contextualize what can happen in a small community across three centuries when a family's dedication to uplift themselves is centered on bringing everyone else along."

And about earlier works --

"If the man who bankrolled the MacArthur 'genius awards' is a mystery to you, pick up Nancy Kriplen's lively biography, The Eccentric Billionaire ....Kriplen, a former Time magazine staffer, writes in rat-a- tat, anecdotal style that belies the depth of her research. She knows how to spin a yarn and never bogs down in details, even when insurance regulators heave into view."
-- Bloomberg News


"MacArthur's life is a story worth telling...a contradictory and mysterious man who amassed great wealth over several decades but is still far from well-known, who founded an influential and generous foundation about which he cared not a bit."
-- USA Today